The Sinbad Desert Amateur Radio Club is a general purpose club that serves the Carbon and Emery Counties mainly, but has members from all over the state of Utah and surrounding states. The club was formed by local Hams in Eastern Utah in 1982 by individuals with common interests in Radio, which range from “Rag-chews” on a stand alone repeater, the SDARC “System”, or on many modes of operation on the “HF” bands. 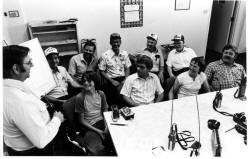 The Sinbad Desert ARC’s inception began in 1980 when individuals grouped together with a common goal to become licensed Amateur Radio Operators. This group started classes during this year and went nonstop till they advanced to Amateur Extra or until they decided that they needed a break in studying. Norm Smith (KA7KXI), Dale Christiansen (KA7LED), Bret Mills (KA7LEF then WX7Y now), Allan Orton (KA7LEG), Ross Fausett (KA7LGE), Steven Holden KA7PYP, Marv Dalton, Lou Ann Arnold KA7NPR, Craig Larsen KD7GI ,  and others became licensed at this time. Many spouses, new licensees, and many upgrades occurred from the second class session. By 1983 many of these individuals were either held an Advanced or Amateur Extra license. This picture is from the third class session offered in the area, the first class session sponsored by the newly formed Sinbad Desert Amateur Radio Club. The Club now has the call of K7SDC.